One theory about this week’s nice spike in the stock market is that it was driven by news that shit isn’t as bad as it could be. Here’s a quote from today’s New York Times:

“General Electric, the blue-chip corporation, was stripped of its triple-A credit rating, an emblem of business prowess it proudly held since 1956. But its rating fell just one notch, less than some analysts predicted. Shares of G.E. soared 13 percent…
Less bad was good enough.”

Maybe in these diminished times, diminished claims have their place. Think about all those DTC fair-balance warnings…we could make some kickass claims out of those:

“Shown to be 24% less likely to cause blindness, insanity or death than other cholesterol reducers.”

The coal lobby’s “Clean Coal” ads, which the Coen brothers savagely and appropriately turned upside down (thanks for the tipoff, American Copywriter dudes) can escape further ridicule with the truth: 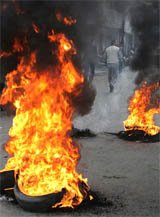