–Talking Heads, “(Nothing but) Flowers”

What is the future of advertising?

Here’s an idea: reward customers by relieving them of the burden of seeing ads. It’s based on the not-particularly brilliant insight that most people avoid advertising if they can. So if you’re a marketer and you’re trying to forge bonds of loyalty with your customers, why not give them what they want: nonvertising.

Here’s how it works. Let’s say you’re Coors Light. And let’s say you’re on track to hit your numbers for sales and profitability. To thank your loyal customers, you give back the 8 minutes of time you bought on the NFL game of the week. You don’t sell it off to another advertiser. You give it back to the customer and tell them you did so.

Conversely, if sales or share starts to slip, the advertising returns. And your target is made to see inane re-edits of NFL coach press conferences until he puts down that Bud Light and locks and loads the Silver Bullet instead. 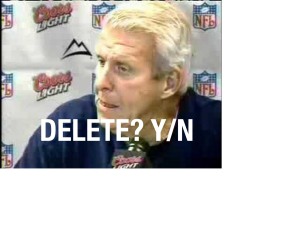 This, of course, is the exact opposite of what advertisers do now. As their market share goes up, brands tend to increase their ad spending. This, ultimately, becomes counter-productive because–did I mention?–people don’t like advertising.

Nonvertising is already happening at the margins. It just doesn’t have a name yet. Think about when your local NPR station does its fundraising drive. They tell you before it starts: cough up your contribution and if we get enough money we’ll cut the fund drive short by a day. Ira Glass and the Car Talk guys know you don’t want to sit there and hear them yammer about public radio’s funding shortfall and the big bad Federal government meanies. And they leverage that fact to their benefit–and ours.

Another example: ad-free “premium” versions of websites like Pandora. You want a clean, clutter-free environment? Pay for it.
Now this isn’t a perfect analogy because the advertiser has no say (and no upside) in whether the customer is subjected to his ads or not…it’s between the site and the user. But still, the basic thinking is the same: use your customer’s desire not to be bombarded with ads as a way to increase traction.

There’s a lovely old science fiction short story by Frederik Pohl called “The Midas Plague.” Written in the 1950s, when post-war American prosperity was really ramping up, it imagined a time in the not-too-distant future when the greatest challenge society faced was material over-abundance. If people didn’t consume in large enough amounts, at a fast enough rate, the wheels of commerce (which in those days largely meant manufacturing, of course) would grind to a halt. In this future, our notion of wealth and poverty was turned on its head. The poorest people were saddled with the most material goods. Their lives were a constant grind of purchasing and consuming, played out in enormous gilded palaces and huge cars. Those at the apex of society, on the other hand, had the means to avoid this misfortunate, and lived in the luxury of austere simplicity.

Now substitute “advertising” for washing machines, lawn mowers and color TVs, and you have the world the way it is (or at least, America the way it is): the well-to-do watch PBS and TV on demand, drive through streets lined with trees, not billboards, and listen to satellite radio in the car. Their Macs are a shimmering expanse of aluminum, 100% decal-free. They prefer environments and media with few or no ads, and pay for the privilege.

Advertising does not suffer from lack of efficacy. It suffers from too much muchness. Brands that figure out how to lessen that, in a way that customers can identify with that brand, stand to benefit greatly.