Watching cable channels like Bravo and TBS means being treated to a crazy mishmash of expensive national spots and low-rent local ads in every commercial break pod.

Glossy effects-rich corporate anthems alternate with messages from local nail spas and rug stores shot on a Flip and edited on iMovie. Aspect ratios stretch and shrink like cheap suits: too wide, too narrow, not enough letterbox or too much.

It’s entertaining the way a good downtown street is entertaining: bodegas and chic restaurants, hardware stores and glam boutiques are all in the mix.

But this collision of high and low commerce also underscores the sad fact that budget doesn’t correlate to goodness. Let’s construct a suckage matrix: 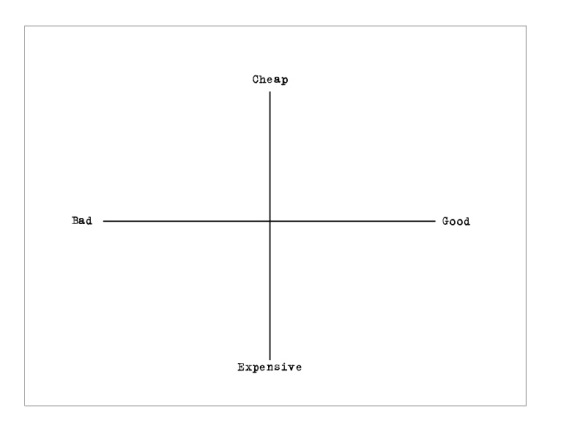 The best place to be, of course, is in the upper-right quadrant: great advertising that costs virtually nothing to make. Google’s Parisian Love spot is a fine example.

The upper-left quadrant, bad advertising that was made on the cheap, isn’t fun to watch (or produce) but it’s not a surprise and—viewed strictly as a business decision– it’s not a disgrace. If it works, great; if not, no biggie.

Good advertising that costs a lot of money to make–the lower right quadrant– is simply what one would expect when you give a lot of creative talent the resources to realize their idea.  BBDO built a global agency almost entirely in this quadrant: making pretty good and occasionally terrific big-budget TV spots for Fedex, GE and Pepsi.

And then there’s the death quadrant: bad advertising that cost a fortune to make. You see less of it than you used to, partly because no one has any money and partly because of the internet. But occasionally you see something that just takes your breath away as you watch millions of dollars go up in sooty, stinky smoke.

Such is the new TransAmerica campaign. If you haven’t seen it, please, please do. I can’t really do justice to all its expensive, CGI suckage.  It includes humongous gears, a conveniently deceased husband, a yellow cottage and something about pyramids. Oh—and a girl who sings a treacly bit of “Tomorrow” from the musical “Annie.” Really.

To understand how something like this could get conceived, let alone presented, sold, produced and aired, it’s instructive to read the Adweek puff piece that ran the week the campaign debuted.

The underlying theme of the article is that life insurance is really fucking boring and so the agency creatives had to challenge themselves to find a way to make it less boring. Translation: “This shit doesn’t interest us because we’re 32 years old and we’re going to live forever. But really big gears could be cool.”

Exactly. But that still leaves the question of how on earth JWT sold this nonsense to the client. The answer lies in this bit of helpful reportage: “Each ad uses special effects to literally get under the roof of Transamerica’s iconic ‘Pyramid’ building in San Francisco…”

In other words, the agency convinced the client these ads “leveraged his brand equity.” Except for one thing:

You don’t know you’re in the “Pyramid” building because the pyramid doesn’t appear until the last 2 seconds.

So this entire hellish life-as-a-giant-factory-assembly-line metaphor unfolds with zero context and zero explanation.  Makes the eyebrow-threading spot that followed it that night look pretty, pretty good.

3 thoughts on “The Suckage Matrix”