Today is the first fully operational day with my new iPhone after 16 months with the DroidX. (Verizon Wireless  did their deal with Apple 3 months after I broke down and got the Droid. I was going to be damned if I was going to fork over an additional 400 bucks to skip to the head of the line).

Seeing as how half the spots on the upcoming Big Game (which is what advertisers call the Super Bowl when they’re too cheap to buy the usage rights from the NFL) will feature bright young people peering rapturously into screens, I thought I’d give a long-time Apple but short-time smartphone user’s perspective, with the Motorola DroidX as my frame of reference (yes, I had a Palm first but we won’t talk about that).

The screen’s smaller than the Droid’s but brighter. It seems like it’s higher resolution, too, but that may just be a better interface. I liked looking at photos better on the Droid. I like managing and importing them better on the iPhone.

Adding is easy. Deleting is a problem. Like a digital Roach Motel, stuff that goes into an 1Phone won’t come out. When I synched the phone with my iPhoto library, I let it suck up the whole library, assuming I could just nuke the dupes and shots I didn’t like from the phone’s photo gallery.

In what seems to me to be a fatally stupid quirk, I have to go back to iPhoto (which is not my default photo library because I use Adobe Bridge/Photoshop) on the comp, create a new file of just shots I want for my phone, and re-sync. Excuse me Apple, but that’s some Microsoft Zune shit right there.

Same issue with music. And with home page icons. With the Droid, you just selected an icon and held your finger down till it glowed as red as an Iranian reactor, then dragged it to the Trash. Easy.

It’s true what they say. There are better apps for the iPhone. Didn’t realize what a B-lister I was till I wandered around the App Store and saw what I was missing. Big big difference.

The camera is amazing. There is simply no need for a dedicated point-and-shoot camera anymore. Save your SureShot until it reaches the Lomography-retro-chic zone.

Siri is not too bright. And not nearly as sexy-sounding as the Emma Peel-wannabe voice on the old TomTom GPS.

iPhone cases are stoopid. Except for the one I’m getting on Etsy: 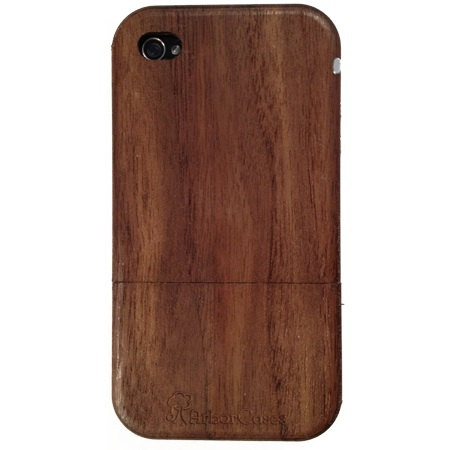 All walnut all the time