Hank Seiden, founding partner of my agency, passed away this week after a long battle with prostate cancer.

The memorial service was on Friday, and many of the advertising luminaries of his era—Jerry Della Femina, Tony Isidore, Dick Tarlow—came to pay their respects.

Funerals in general being for the benefit of family and friends and not industry insiders, there wasn’t a lot of advertising talk in the service. But Hank had a number of strong beliefs about advertising, beliefs he was not shy about expressing in his columns and books.

Hank’s central belief was that strategy is more important than execution. In other words, a brilliant strategy will work even when couched in a crappy execution, but a crappy strategy cannot be saved even by the most brilliant execution. 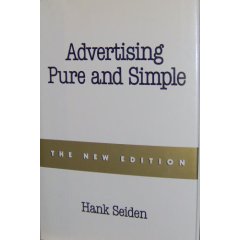 Right or wrong, this was a peculiar stance for a creative director to take, and it put him, both metaphorically and often literally, on the client side of the table. It also earned him the scorn of many in the creative community—a scorn which he wore as a kind of badge of honor.

Hank was a copywriter by training and a creative director by title, but in truth he was really what we now call a planner. He was superb at helping his clients chart a course for where they should position their products vs. the competition, who they should talk to, and what these prospects would find persuasive. He was completely indifferent to the craft aspects of the process, whether out of true lack of interest or feigned, I’ll never know. And predictably, with every passing year, he grew further and further disengaged from what he dismissively called “the fun and games of the business.”

Hank was also a brilliant client handler, and he inspired intense loyalty from a lot of very senior client-side executives. After retiring from Jordan Case, he was able to draw on that loyalty to start what is now Seiden Advertising. I joined Seiden at Hank’s invitation in 2000, essentially to take over as Creative Director because he was finally ready to hang it up.

This was only fitting, I guess, because 26 years previously, Hank had also been my first boss in advertising, at Hicks & Greist. I was there for little over a year, but learned a huge amount from him. There’s no doubt that a lot of my bedrock beliefs about communication were formed during that time.

A lot of what I learned from Hank I’ve since unlearned. I think craft is holy. I think strategy doesn’t matter in a lot of categories, and I think bad execution can ruin a smart strategy.

But, hey, everyone has to start somewhere. I started with a guy who knew a real idea when he saw it, and saw past the smoke and mirrors that still occasionally blind us.

And for that, I’ll always be grateful.